Dredging Up the Past: The Panama Canal

A man, a plan, a canal, Panama! While this makes for a clever palindrome, the development of the Panama canal was far more nuanced and complicated. It required political maneuvering, international intrigue, and of course, the advancement of dredging technologies and machinery. All of these factors came together to create one of the major building projects of the 20th century, and to create a canal that is still actively used today, over a century later.

As dredging company ourselves, U.S. Aqua Services is committed to ensuring our dredging technologies and services are always on the cutting edge. This way we can meet any of your dredge rental needs to make your project as easy as possible. But we’re also interested in the past, looking back at the great projects that defined the field and provide inspiration for our work even today.

The mid-1800s were an interesting time for the Western Hemisphere. While the United States was rapidly becoming the dominant power in the region, there were still many global empires and competitors that still laid claim to parts of Central and South America. The US kept this in mind as they maneuvered and vied for increased presence and power in the region. As the still young nation expanded westward from East coast to West coast, many soon recognized the value of having a canal that would link the Atlantic to the Pacific, allowing for the rapid transport of materials and goods from the coasts.

The US identified the Republic of Nicaragua as an ideal place to begin a canal. But the British Empire had similar thoughts in mind. During the 1800s, Great Britain was at the height of their global power, with colonies and holdings all over the world. They too recognized the value of having a shipping canal through the Americas, as it would reduce the costly and time-intensive journeys of sending cargo ships around the cape of South Africa to get to places like India, and Australia.

The two nations negotiated the Clayton-Bulwer Treaty as a way to stymie any competition or rivalry between the two. This was a way to ensure that both powers got to reap the benefits of the canal, without leading to a shooting war in Central America. Unfortunately, despite all of the planning and agreements, the proposed canal never materialized in the Republic of Nicaragua, for political reasons, monetary reasons, as well as military reasons. The United States was soon embroiled in its own Civil War and had little time to consider an international construction project.

But that didn’t mean that other powers weren’t planning similar projects. In the 1880s, France was also a global power and looked to the Colombian province of Panama as the ideal place for a canal. Led by Ferdinand de Lesseps, the lead of the impressive Suez Canal project in Egypt, the French began a major excavation project in Panama. But despite their motivation and investment, the project slowly dwindled to a halt. While the Suez project had been relatively straightforward because of the soil content and topography of the region, Panama was not at all the same. The new ladder and bucket dredgers employed by the French were unable to work their way through the unforgiving and variating terrain of Panama. Malaria, yellow fever, and other terrible tropical diseases ran rampant through the construction teams, and nearly 20,000 workers would succumb to the diseases. After nine years of toil, the French abandoned the project.

Not concerned by the earlier collapse of interest, and the failures of the French expedition, the US showed renewed interest in a canal project at the turn of the 20th century. The United States by this time was now the unquestioned superpower in the Western Hemisphere, and therefore no longer had to arrange treaties with foreign powers. In 1901, the Hay-Pauncefote Treaty did away with the agreements set forth in the Clayton-Bulwer Treaty and allowed the US alone to proceed with a canal project in Central America.

Leading the charge for this new American made canal was Theodore Roosevelt. A larger-than-life figure, the bombastic American President was famous for his bull-headed determination to finish major projects for the US. The Panama canal soon became an object of fascination for Roosevelt, and he sank resources, men, and materials into the project without a second thought.

1902 brought the reality of a canal ever closer, as Congress approved the construction of the canal through Panama as opposed to Nicaragua. A treaty was signed with the Colombian Foreign Minister to allow construction in their province, but the Central American nation rejected the financial offering the US made. Undeterred, the United States responded by sending the warships of its Great White Fleet to Panama City to support the Panamanian independence movement. Colombia, realizing they were outmatched by the US-backed Panama troops, and the unforgiving jungle terrain of Panama, declared the province independent in November of 1903.

The new Republic of Panama quickly approved the Hay-Bunau-Varilla Treaty, which granted the US a ten-mile swath of land for the construction of the canal for a one-time payment of $10 million. The US immediately began sending workers and supplies to the region and occupied the work sites the French had abandoned. Left behind at the old French project were many of the dredgers that de Lesseps and his crews had used during their nine-year foray into the jungle.

Though they had abandoned the project, the French had still moved nearly 60 million cubic meters of earth during their canal project. This provided a head start to the new American venture. In 1904, the first American steam shovels, and a new generation of more powerful dredgers began digging into the Panamanian soil. Spearheaded by the Army Corps of Engineers, the US strategy for the canal differed from that of the French. Rather than a sea-level canal, the US engineers quickly realized that a lock system was far better suited to the topography of Panama, as it would keep the canal from flooding, as well as being more effective and more cost-effective to maintain.

The Americans also brought with them technology that had dramatically improved in the nearly 30 years between the French project and their own. Rather than using the bucket ladder dredgers the French brought with them, the Army engineers brought with them a new generation of hydraulic cutter suction dredgers. These new dredgers had a rotating cutter at the end of a suction line that was able to be swapped out to cut into the various materials that the Panamanian soils were made of. Not only were the American engineers able to move massive amounts of earth faster than the French, they also maintained the health of their workers more effectively. The Army establish a Sanitary Corp to help combat the same tropical diseases that had decimated the French workers. This allowed the US workforce to stay healthy, and concentrate on the task at hand. 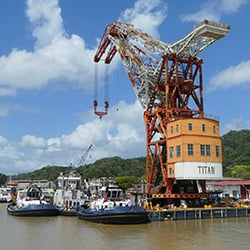 The Panama Canal was completed in 1914, and the first US ship to pass through the canal was the Ancon, which carried both cargo and passengers. The canal would prove useful in sending supplies across the US, and the world more broadly. The Panama canal would be controlled by the US until 1979, when tensions between the US and Panama grew, and the United States seceded control of the canal to Panama itself.

Today, the canal is still used and is one of the busiest in the world. It can accommodate ships carrying nearly 65,000 tons of cargo, and a recent expansion project, completed in 2015 allows the canal to accommodate even larger ships. The canal is still a “work in progress” of sorts, as it is always in need of further dredging to make sure the soil along the sides of the canal does not break away and damage the canal lock system.

The Panama Canal is a marvel of mechanical magnificence. Its construction required new dredging technologies, employed in new ways in harsh conditions. The decade-long project allowed for a new means of global transportation of goods and peoples.

While the Panama Canal is an impressive feat, we recognize that not every project is going to be that big. Lucky for you, U.S. Aqua Services is here to help. If you’re looking for a dredge rental service, don’t hesitate to reach out today. As a top-tier dredging company, we have all the equipment you need to tackle any project. From coastal erosion control, to salvage and emergency dredging, we’re here to help.

Dredging Up The Past: The Suez Canal, Part 1

Welcome back to U.S. Aqua Services look at historic dredging projects. We had a lot of fun...

Dredging Up The Past: The Suez Canal, Part 2

Welcome back to Part 2 of “Dredging Up The Past: The Suez Canal.” If you missed part 1, you can...

Dredging Up The Past: The Suez Canal, Part 3

The Suez Canal has proven to be an enduring source of fascination since it first opened in 1869,...